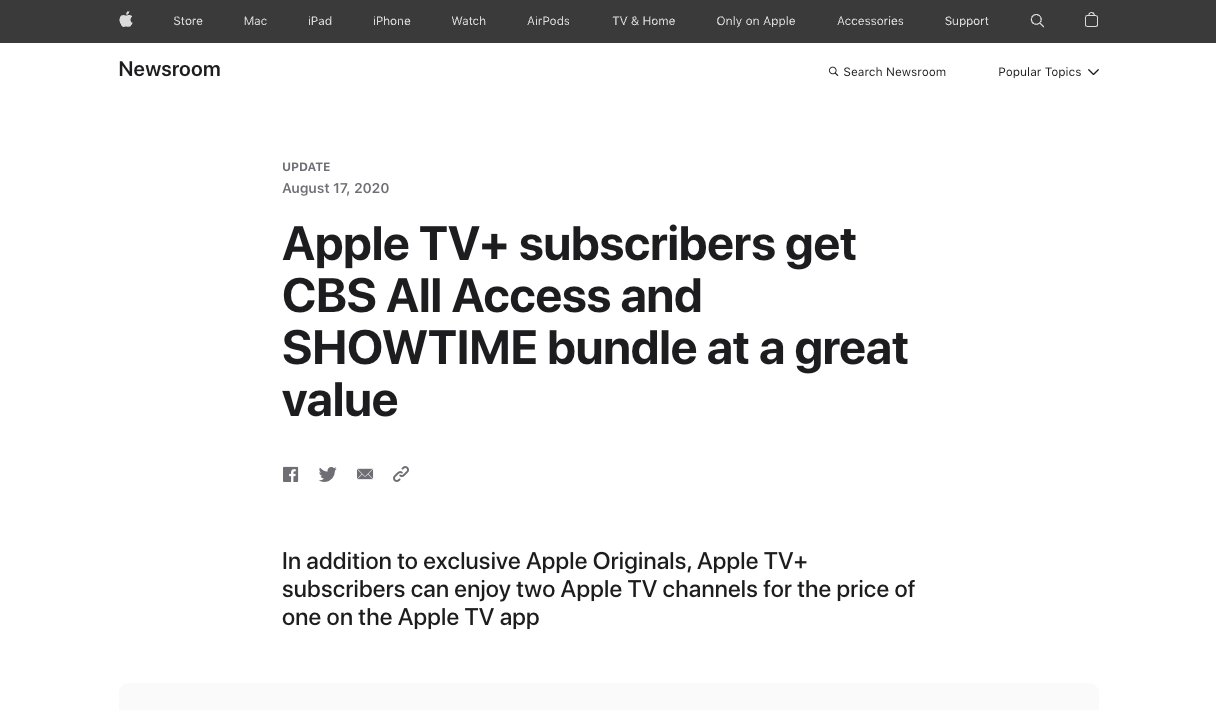 Apple TV+ Subscribers will get CBS All Access and SHOWTIME bundle at a Grate Value:

Apple TV+ subscribers of US will get the advantage of the unique benefits of CBS All Access and SHOWTIME. Users will get the CBS All Access and SHOWTIME at a great value of $9.99 for each month after the seven days of the free trial. After subscribing to all three services, you can access them online and offline, ad-free and on-demand using the Apple TV app. Via Family Sharing features, you can share your subscriptions with up to six family members.

Through this bundle, Apple TV+ subscribers will get access to both CBS All Access Commercial Free plan and SHOWTIME at a very decent price range. CBS All Access provides ad-free, on-demand television services, movies, and other programs, including The Twilight Zone, The Good Fight, Star Trek: Lower Decks, The Late Show with Stephen Colbert. Also, there is an expanded library of ViacomCBS series and movies, including the seasons of Chappelle’s Show, SpongeBob SquarePants, The Legend of Korra, and other shows from Nickelodeon, BET, Comedy Central, MTV, and Paramount Pictures. CBS All Access also lets you access the local CBS station, including major sporting events, like NFL on CBS and others.

Some of the popular shows on SHOWTIME are Black Monday, The Chi, Billions, Homeland, and Desus and Mero. You can also access the SHOWTIME Championship Boxing, and movies and documentaries, such as the Hustlers, Waves, Outcry, and The Go Go’s.

Apple TV currently bringing all the different features together to discover and watch shows, movies, and more in place at the Apple TV app. This app is available on your iPhone, iPad, Apple TV, Mac, and select LG and Samsung Smart TVs, Amazon Fire TV, and Roku devices. This app will surely come on VIZIO and Sony smart TVs within a few months. Also, the customers who have recent purchases of the iPhone, iPad, Mac, Apple TV, or iPod touch will get one year of Apple TV+ subscription for free. Although, this offer is available for a limited period for apple customers.